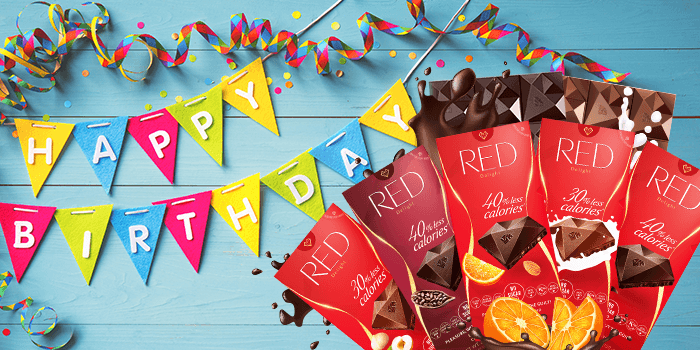 10 May Happy Birthday to RED!

Posted at 11:26h in In the News by Christine Dixon 0 Comments
Spread the love

We made it. The U.S-RED team has successfully taken a trip around the sun.

As some of you may know, RED made its debut in the 2000s throughout Europe. The Swiss-owned Chocolette Confectionary had a dream to revolutionize the chocolate industry by mastering a recipe that delivered the sweetness that chocolate lovers crave without adding refined sugars. It was a dream that sounded so simple but took many years and many batches to bring to life. But, bring to life, they did.

RED has gained popularity quickly throughout western Europe for quite some time. Still, the Chocolette Confectionary continued to expand that dream—and in late 2019, RED was finally introduced to the United States. It was such an exciting time.

We anticipated every opportunity for growth as a new company hitting the market, like traveling to chocolate conventions, shaking hands, and making new friends. And then—2020 happened.

There were no conventions to attend. We said goodbye to in-person meetings. Making new friends became not such an easy task.

Our year apart. Together.

Our pre-COVID world window wasn’t open very long. Chocolate-lovers of the world suddenly had deeper concerns such as how to navigate a world-wide pandemic to discuss, than to explore new chocolates on shelves. People’s livelihoods became uprooted, social media became consumed with breaking news—statistics, doctors, and politics—and, stores closed their doors indefinitely. Not exactly a positive environment for any brand … especially for one who just landed on brand new soil!

We were faced with two choices: Pause efforts and pray that the pandemic didn’t last more than a few months or stick it out, moving full steam ahead trying to make a positive indent amongst the chaos. We chose the latter.

The focus became imminent. We set our eyes on the prize. How do we get this chocolate safely into the bellies of those who need it? So we kept the conversation going. We kept on posting, sending our fans coupons, running incredible contests, and we ended up making some cyber-friends in the process (all handshakes aside).

This is how we met our first fan, Neuman.

Neuman was there from the very beginning! Always liking, sharing, commenting. He made us feel like this was possible. When all felt hopeless, his encouragement and connection made us feel like we really had a shot at this thing. There were others like Neuman—we will hold those folks near and dear to us, forever. Thank you for making yourselves a part of our growing history.

In the beginning, we heavily relied on our website to distribute our product. This outlet alone was not enough. Our Amazon store became the primary focus and soon after months of hard work and magic, we are beyond proud to announce our coast-to-coast expansion. RED had landed on some pretty awesome shelves in national retailers such as Walmart, Sam’s Club, RiteAid, and more.

Although we still may not be as accessible for everyone as we’d hope—we decided to work on a tool that will help our fans score our chocolate without the pain of store-hopping; the store locator became a saving grace for some of our fans!

In the light of our 2020 and COVID-19 struggles, RED shockingly grew XX%! We’re giving YOU a round of applause for that.

Oh, almost forgot—we made some pretty cool friends over at HSN.

We have been lucky to have been featured on HSN three times, selling out or nearly selling out of product during each 10-minute segment. Not long after our HSN experience, we began to notice that our chocolate pralines have been almost impossible to retain in stock! Thanks!

Ah yes, the terrible twos. What an age. While we don’t plan on being terrible, we do plan to stir up some things in the world of low-sugar candies. We don’t want to say too much, but 2021 RED is feelin’ rather feisty. It’d be a shame if you missed out on anything…Luckily, we LOVE interacting with our fans on social media as much as we love posting about our news and updates.

RED chocolate is crafted with all-natural sweeteners derived from melons, all while delivering buttery, creamy flavor without the added refined sugar. 40% less fat and 35% fewer calories than other leading chocolates. RED is low carb, reduced calorie, reduced fat, gluten-free, and Kosher certified. It’s vegetarian, while our dark chocolate assortments are keto-friendly. RED is also Weight Watchers, Whole30, and Atkins friendly. RED can add an extra bit of something special to any crave-curbing snack you desire without the unwanted sugar.